Are you people-of-faith really that confused? Seriously?

The “God Particle” epithet comes from the title of the book The God Particle: If the Universe Is the Answer, What Is the Question? by American Physicist Leon Lederman, whose draft title was That Goddamn Particle, referencing their frustration about the elusive nature of the particle that fits into The Standard Model of physics: The Higgs boson, named after English theoretical physicist Peter Ware Higgs.

This information is really not hard to find at all. If you can tweet, you can google. Actually, you should google and read a little before tweeting about something that you don’t understand — it’s called common sense. Oh wait!

Followers of Jesus have always known about the God particle. ". . . he [Jesus] holds all creation together." Col 1.17

I don't believe in the stupid god particle. Jesus made the universe #Believe

Do you know any Atheists who thank God for proof of the God particle?

Also, does the discovery of the so called God Particle imply that Atheists are Wrong. What do they have to say? I m still Agnostic though.

Wait, we found God's particle? BOOYAH #atheists IN YOUR FACE!!! Now you HAVE to vote for #Romney.

#HiggsBoson God Particle shows #Atheists that #God is real! I bet none of them will agree with their 'science' now though. #Atheisthotline

The God particle is not Higgs Boson, it is Jesus Christ!

All they hype about the Higgs Field was already in the Bible. "Jesus..In whom and through whom all things were made and held together".. ;p

Proof of 'God particle' found – suck on THAT, atheists! http://t.co/WvxOJPZu

So they have just started 2 lie about things now? No, they have not actually observed (discovered) the God's Particle yet. #tcot #bcot #p2

So I heard a bunch of physicists discovered the God Particle today. Checkmate, Atheists.

Hey atheists – they found the God particle. I bet you all feel pretty stupid now, huh??

I don't really believe in the God Particle, but I'm very spiritual. #higgsmoron

just can't believe that they finally found a physical piece of god with the God Particle. that's Faithful: 1, #atheists: 0. maybe next time

when will #atheists wrap it up and admit that the discovery of the God Particle simply disproves everything they believe easily. God is real

See the God particle everyday through meditation and scripture

Science found a God particle. Little do they know, the Higgs boson is God created. All that is, has been, and ever will be is God created

The Higgs boson may be responsible for holding the universe together, but Jesus holds the "God particle" in its place. http://t.co/Rk1WBwHs

I'm sick of hearing about that Higgs- Boson thing. So what! Whoopy-chook! But Who created the God particle?

Prometheus, the God Particle.. Is all about faith. The more scientists go deep the more they should believe in God.

Don't let any news about the #Higgs boson hamper your faith. The greatest of scientists can never explain God. Only #Jesus can.

"Since there is now proof that the #Higgs Boson actually exists, can we stop calling it the "God particle"? NO, BECAUSE GOD EXISTS IDIOT

This search for the "God particle" pales in comparison to knowing the Creator personally. #faith #vanity

It's not the "God Particle" we should look for, rather the "God Person" namely Jesus of Nazareth. It's not we find HIM, it's by FAITH C HIM

The God particle is the return of Jesus. Say amen.

@InfiniteJorge @dr_spidermanMD it was named the God Particle by scientists, I don't see how this could be anything but proof God is real

If Scientists' called that certain thing a "God Particle" then isn't it a strong proof that they believe in God? #iLoveGod

How Ironic that some Obama-loving #atheists found the Higgs Bosen or the "God Particle"!!! Hope they find Jesus soon #tcot

The Higgs boson may be responsible for holding the universe together, but Jesus holds the "God particle" in its place. http://t.co/PF9TiTb6

So, how do you explain the God Particle to atheists?

Now that we’ve found the god particle I hope you atheists out there will now believe.

How 'bout that Friggin' God Particle? Take that, Atheists. #noideawhatthatmeans

Jesus Christ gives life to the God particle within us.

Scientist are about to find the "God" particle. Proof that #God exists. #Higgs

@DRUDGE_REPORT Having faith is the only "God Particle" we have ever needed. The Bible says you either believe in him or you don't.

The 'God' particle. Why do people desire to want to believe science and not have faith in God. When we die, God is still there!

So they have found the God Particle…guess atheists got it wrong then! #higgsbosonparticle

Jesus is the only God particle in my life…and the bible the only particle accelerator i need. #CERN

@DoRobotsDream God said that only fools need proof that He exists… and that what CERN is doing. Looking for a God particle. #FAITH

Will atheists believe in the god particle? #HiggsBoson

lol didnt dinosaur fossils teach you ANYTHING #atheists? its calledd the GOD particle because HE put it there to test ur faith. #losers

This whole big bang theory new particle discovery thing is crap!!!!!! Read the Bible idiots!!! It's all God! Y'all r wasting your time.

Atheist put their faith in a "God Particle" Where did that come from? I'll keep my faith with God Thank You. http://t.co/atxDOCQd

Hey #atheists!! Guess who created you're beloved Higgs-Boson "God particle"??? God!! To bad you are to dumb too see that!! #atheism #atheist

The discovery of the God Particle on July 4th is proof of Jesus' love of America. #HiggsFacts

Do you think the "God Particle" is shaped like a cross? #HiggsBoson #God #Jesus #Christian

So they're finding telltale hints that the Higgs boson (the God particle) exists. Atheists are so owned.

The "God particle" is full of crap! the big bang theory is just rubbish, Science is full of shit! Higgs can kiss my ass!!!!

@_kanmiya Well, God created everything else besides the Higgs boson, but why call that particular one the "God particle"? Beats me…

Proof that #God exists and wants us to laugh – God particle announced “@cdbond: Comic Sans = Hufflepuff of all fonts. /via RT @_Umbridge_”

What the libidiot scientist won't tell U; where did the GOD particle come from? Duh! GOD! All they had 2 do is read the bible! #tcot #tlot

Now that the 'god particle' has finally been found could CERN please hurry up & find an 'anti-god particle' for all the unhappy atheists! 😉

Now that we've discovered the God particle, can we all agree to admit that God is totally real now. #Higgs

What does it say that God's own particle was discovered in evil socialist Europe by fake-climate-change-science supporters?

"He (Jesus) existed before anything else, and holds all creation together" – Col 1:17. That's the real 'God Particle'!

pretty excited we found the god particle. hopefully this'll hush up those atheists.

what a blessing that #science has finally discovered the God particle. now the #atheists have no excuses for their denial of Jesus Christ!

of course the God particle helps us understand mass, all matter was created by OUR LORD AND SAVIOR. why can't #atheists understand? 😉

Why did they need an expensive machine to find the god particle if churches are made out of or already? Stupid #atheists

Your support is greatly appreciated

You can support this site by buying your titles through

or directly from Amazon

Drag this link to your bookmarks toolbar! 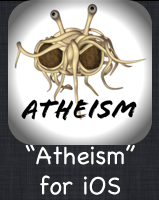 Your support is greatly appreciated

You believe in a book which has talking animals, wizards, witches, demons, sticks turning into snakes, food falling from the sky, people walking on water, and all sorts of magical, absurd, and primitive stories; and you say that I am the one who is mentally ill?

Learn To Think Critically, not only about religion and gods, but about everything.

We live in a world full of magic, pseudoscience, and all kinds of harmful ways of thinking. Rid of these things, educate yourself - it is liberating.